Remy Bea celebrated her 3rd birthday in January. Last year, for her second birthday, I planned an elaborate party. But January is a rough month in general. And between flu season and weather, I feel like I can never count on anything to fall into place, let alone everything that needs to for a party. Alas, it had to be cancelled.

So this year I felt like I really needed to make sure she had a great birthday party. And that’s why I planned a delayed birthday party for March!

Her one request from her Mimi was a Barbie cake. I don’t know what happened, but this child turned 3 and she decided she was a million percent girly. Well, a Barbie cake she received!

Her theme? Well, technically she didn’t have a “theme,” but she had a color scheme! And that color scheme was baby blues, pinks, gold, and GLITTER — so much glitter and sparkle!

The day of her party we were lucky to have so many of the people who love her present! Cousins, friends, grandparents, aunts, and uncles — they were all ready to celebrate our special little lady.

I debated the food for forever. I usually keep the food “on theme” but I was coming up blank for a kid who either wants to eat everything or wants to eat absolutely nothing but yogurt. Well, we went with a simple route — Philly Cheesesteak Sliders on Hawaiian Rolls (thank you, Instant Pot!), Remy’s favorite veggies (carrots + cucumbers) with dip, chips (obviously a toddler staple), and salad (oddly enough, also a Remy fave)

Her Mimi (my mom) made her two cakes — her requested Barbie cake and a blue ombré round cake with pink candies in the center. The ombré was a surprise from Mimi to Remy and she loved it!

After everyone snacked and chatted, we headed down to the gymnastics center for some tumbling. All of the kids — young and old — had so much fun.

By the end of the day, we were all completely worn out. But it was entirely worth it to see the joy in Remy’s eyes as we all celebrated her big day!

One day I’ll be the mom that is on top of everything. This is not that time, friends. Hence, a belated birthday recap for my middle child — the one who keeps me on my toes — Remy Bea.

It seemed like just yesterday that she came bursting into our world — faster than expected and with a full head of hair!

Since that day, she’s been full of spunk and sass. Her first year of life made me literally question whether or not I could survive my battle of postpartum depression and anxiety. It was really, really awful and I was not in a good place.

But soon after her first birthday, we settled into a routine that was — dare I say it — enjoyable! Her spunk and sass went from “threatening” to hilarious. She was an absolute joy!

Thank goodness, right?? Well, that joy of a child made me so brave in my pursuits of motherhood that I decided to have a third. And at some point between getting pregnant with baby number three and her arrival, Remy Bea turned into a full-fledged terrible two-year-old.

Over the last year, we’ve been learning a lot about one another. I know that she is incredibly strong-willed — which I keep reminding myself will suit her well through her adolescent and early adult years.

She is smart and brave and funnier than most other people I’ve met. She will light up a room with her smile and tell you exactly what is on her mind. She will steal your snacks and convince you to share your food with her. She will sing you her favorite songs and encourage you to ‘try your best.’

And I love every part of her — every painful, every stubborn, and every wonderful part of her.

Happy (belated) third birthday, Remy Bea. I love you a bushel and a peck. ♥

I’d be lying if I said I’ve been my best self lately. So much of my time has been spent correcting my children and then losing it by screaming and then feeling incredibly guilty. I realize this is a season we’re in — I have a very defiant (strong willed?) two year old and a 5 year old with a serious listening problem.

Add in a 31 week pregnant (aka exhausted) mama, and there’s pure chaos and rage.

So yeah. I haven’t been my best self. But I’m trying. I acknowledge those moments, sometimes apologize to my kids, and we all move on. There’s a learning curve for sure.

But as I scroll through my photos on my phone, I also see something that I often overlook — JOY.

My kids are happy. And, most of the time, I am too.

Here’s what our life looks like in pictures as of late (in completely candid / unfiltered photos): 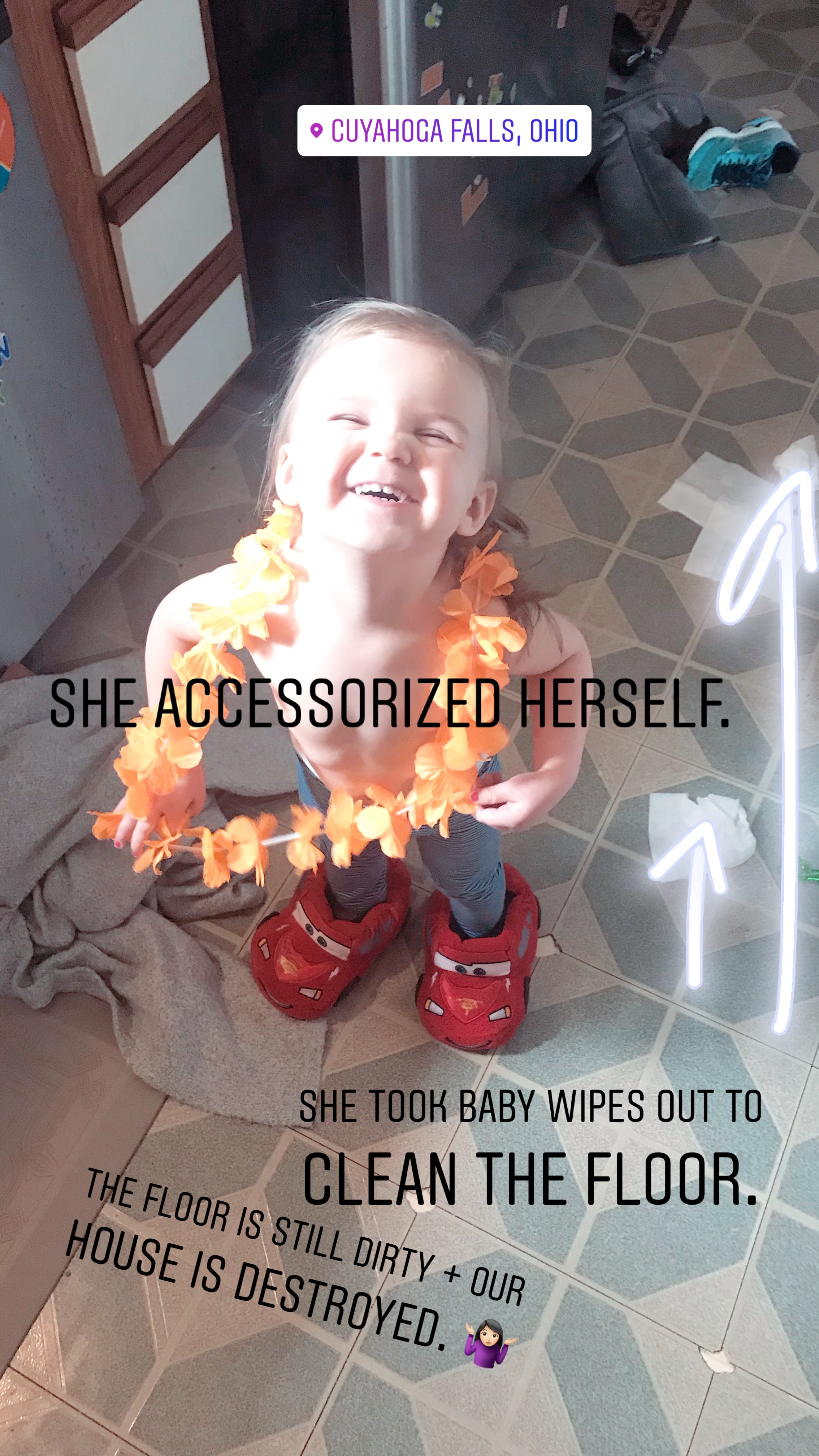 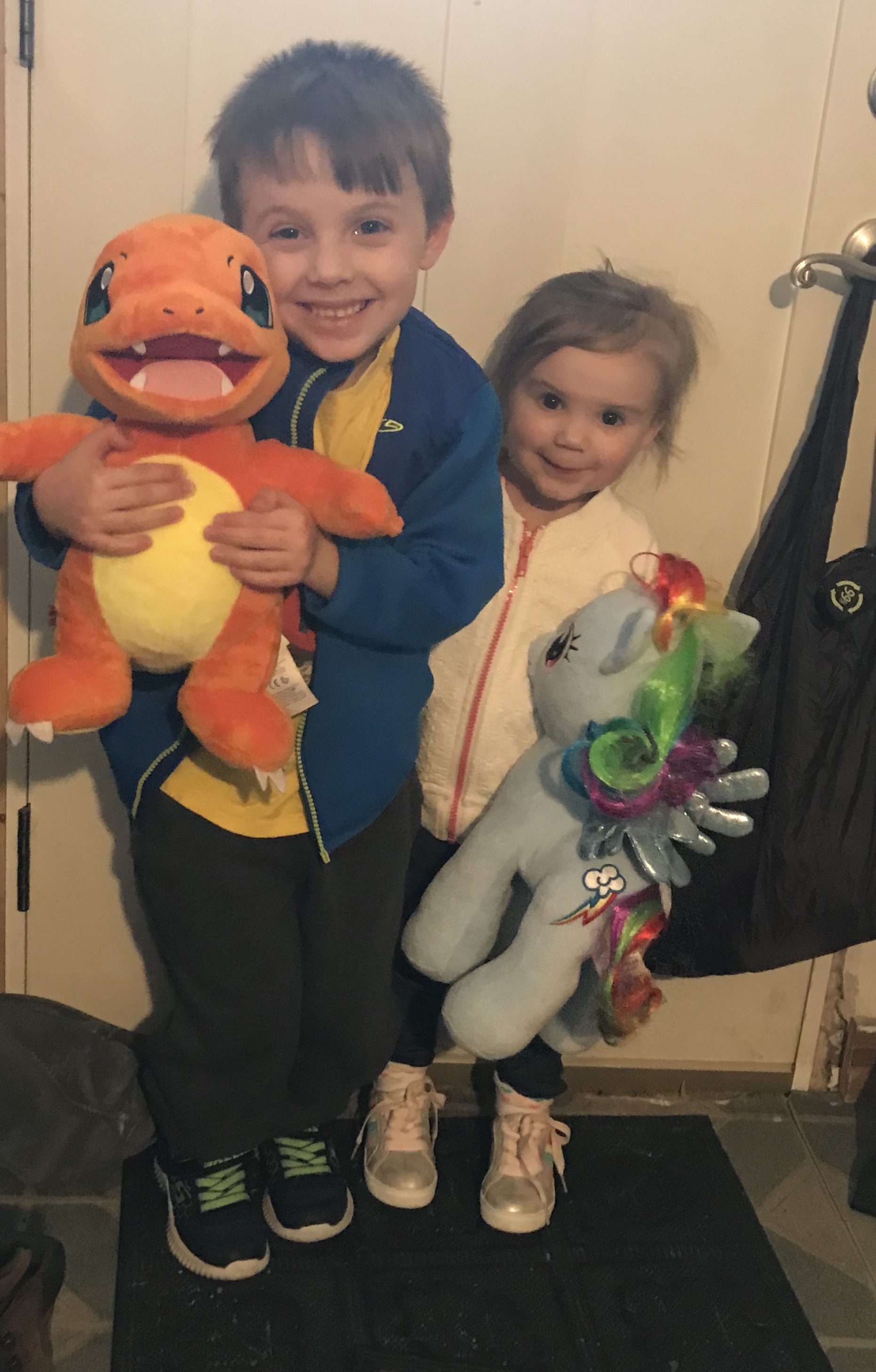 Looking at these moments brings me so much joy. Knowing that THESE are the moments in which my children will have memories — not the ugly times we’re all throwing fits. So snap those pictures and remember those happy moments, friends. xo

I can’t keep it a secret any longer! I know I said we weren’t going to find out the gender of this baby, but at that 20 week anatomy scan I started having second thoughts. I text Chad and said “I think I want to know.” He, of course, couldn’t be there for that appointment and gave his blessing for me to find out for us. But I still waited. I had the ultrasound technician write it down and put it in an envelope for us.

I could barely contain myself to wait til Chad got home from work. Chad was convinced we were having another boy, but I really wanted another girl. I mean, we already have one of each, but I just have grown to love the sass of a little girl.

We opened the envelope and it said “Congratulations — it’s a girl!” and I literally jumped into Chad’s arms. I was so excited. Heck, I’m still so excited. But we waited to make a big announcement because, well, it was a bit more fun that way.

It’s been getting harder and harder to keep it a secret, especially when you have a 5 year old who is willing to tell everyone, “I’m having another baby sister!” Ha.

And aren’t these the cutest little flower moccs you’ve ever seen!? For those who are unfamiliar, these moccasins are so soft and come in so many different patterns (umm, have you seen the tacos and donuts!?), and just so happen to be perfect for newborns and tiny walkers!

And this little lady was so happy to pose in her most recent pair of rose gold moccs. Ha! And that dress? Well, little miss #2 has an exact same dress for when she’s born (thanks, Mimi!). Hopefully Remy’s will still fit her in June. 😉

Thank you everyone for the love during this pregnancy! I can’t wait to share her name in the coming weeks (that’s something we WILL be keeping on the downlow until birth).

Oh, my spirited little girl… Admittedly, I did not quite understand what ‘other parents’ meant when they said they had spirited children. I thought, “Spirited?! You just mean misbehaved??”

I can honestly say, I was one-thousand percent WRONG.

Spirited children are just that… full of a wild, untamed, spirit!

That is exactly my Remy Bea. And on her second birthday, I will celebrate her wild spirit.

Because she is also so silly. Her laugh is contagious. And her smile is electrifying.

She is way smarter than I could imagine a child being at her age. And she understands way too much for her own good.

She may be tiny (weighing in at a ‘whopping’ 23 pounds at 2 years), but she truly is a force to be reckoned with.

Looking back, I should have known from her labor and delivery that she would be a spitfire. Making a bold entrance was kind of her thing. Turns out it still is.

It’s hard to believe that in a few months time you’ll be a middle sister. It’s a role I think you were made for. And one you will thrive in.

But for now — well, for the next 20 weeks — I’m going to just going to bask in your presence, Remy Bea. I’m going to continue to be grateful that I’ve had two years of you as my ‘baby.’ Our road has been troubled but beautiful — just like you.

PS. Isn’t her outfit from The Picket Fence in Pittsburgh the absolute cutest?! No worries — you don’t have to be in Pittsburgh to order. Check out their full line of baby, kids, and womens items here.

BONUS! Use the Rafflecopter widget below to enter to win a $50 Gift Card to The Picket Fence, which can be used either online or in-store!

This post was sponsored by Nakturnal. As always, all opinions herein are my own.

Guys – something amazing happened this Summer — we had fun — and I stepped a bit away from this here blog. I did, however, start posting all kinds of photos to my Instagram stories as a way of ‘photo-blogging’ my way through the summer months!

In case you aren’t following me on Instagram (which, why aren’t you!?), here’s our Summer in Insta-stories: 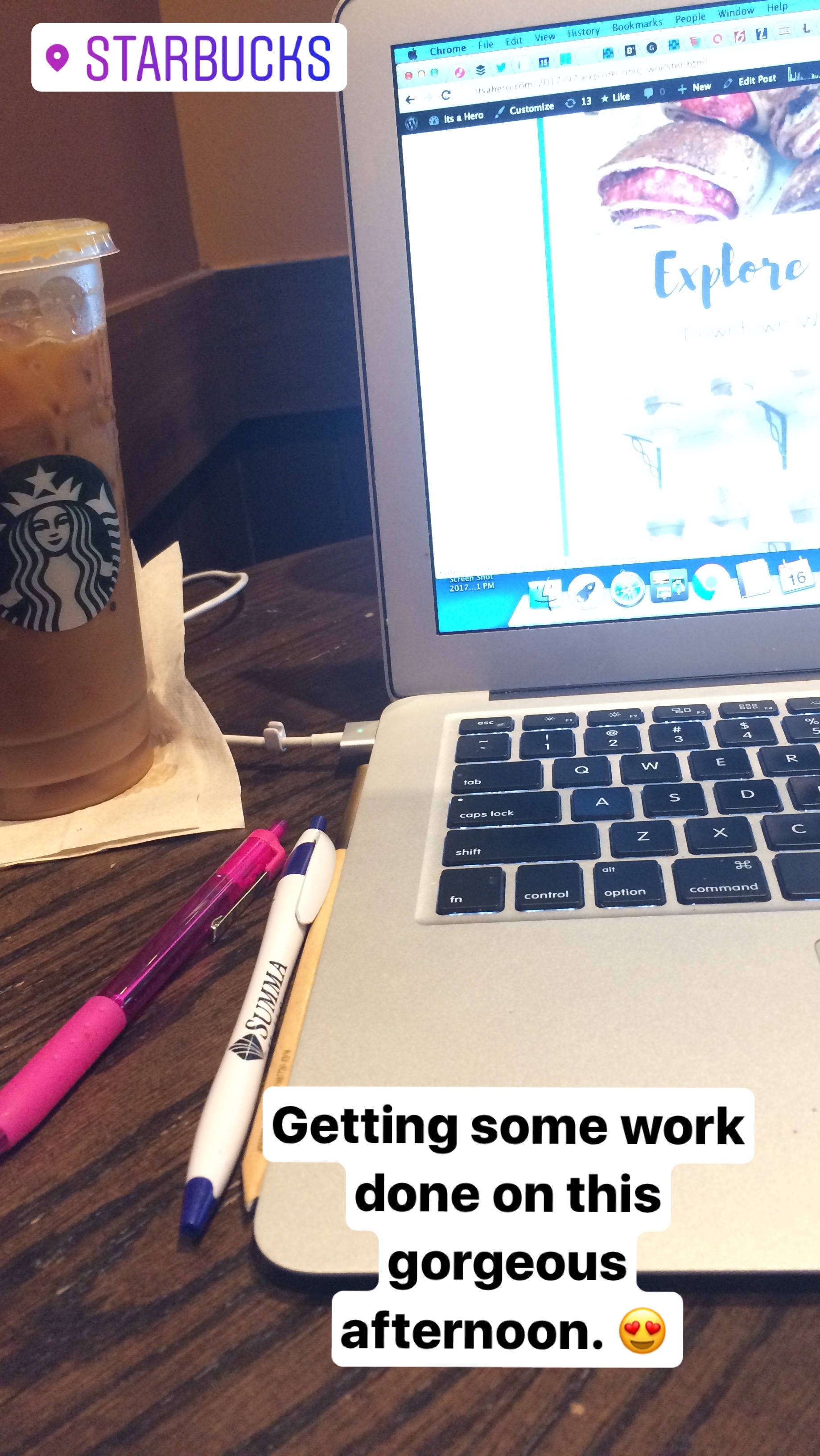 I worked out a LOT.

We visited the farmers market often.

Adventures at the zoo!

We spent a lot of time eating samples at Costco.

My children had a blast at the YMCA — both while I was working and while they
(well, specifically, Ari, was in swim lessons!).

We went to Kentucky to visit my parents.

We celebrated my nephews first birthday!

We took a BIG family vacay to Hilton Head!

Basically, all of these pictures and I’m all “OMG I can’t believe it’s nearly September!” And now we have exactly ONE WEEK left of Summer break before our new school year starts. I’m absolutely going to make the most of this week and get one more ‘hurrah’ outta Summer! 😉